THEN: 6 AsAm federal judges, all at the District level -- when 80-20 held a
press conference in LA to change that sad situation in 2006;
NOW: 12 AmAm federal judges, 1 at the higher Appeals Court level, only 5
years later! ( 2 AsAm nominees still await Senate confirmation.)

Congratulations to AsAm elected officials Mike Honda & Judy Chu for using
the political process to benefit the AsAm community. We hope
to see more such occurrences.

The agreement is about "increasing the inclusion of AsAms" in a newly
proposed media joint venture, Comcast/NBCU. In exchange for more
"inclusion", the AsAm group provided political support for the proposed joint
venture by urging for FCC's approval. Visit http://tinyurl.com/39ynl2x & http://blog.comcast.com/2010/12/comcast-nbcu-and-asian-american-leaders-join-to-expand-media-diversity-and-community-engagement.html.

Our community must encourage AsAm elected officials & civic
organizations to do MORE OF THE SAME -- using the political process to help
us become equal citizens.

Recall that 80-20 endorsed a couple of Republican candidates last Nov?
Those candidates lost, but the benefits for our community because 80-20
endorsed some Republicans will keep on coming in. Here is one example.

Shortly after the Nov. election, the LA Times published an article, titled
"The party that wins Asian voters may benefit for decades". Visit
http://www.latimes.com/news/local/la-me-theweek-20101121,0,3620387.story.
Its central message is "Asian voters, unlike other minorities, are willing to
consider Republican candidates."

Always ready to deliver a "SWING BLOC VOTE!". We are not equal citizens
yet. Before we achieve equal citizenship, it is best to keep both major
political parties GUESSING so that they will compete to serve our rightful
interest -- to become equal citizens -- in order to get our votes.

Die-hard Democrats/Republicans: Please THINK along with us!

80-20 established 4 chapters in Ohio in 2 years, the perpetual presidential
battleground. The first to establish was the NW-Ohio Chapter, under Prof.
Yueh-ting Lee. See its many effective political actions:

a) Inviting Congresswoman Judy Chu of CA to meet with its chapter members,
b) Meeting their own Congresswoman Kaptur of Ohio 9th*, and
c) Toledo Mayor Michael Bell held a reception for 80-20 & it guests**.

E) Want a $5,000 Internship through which the latest in technolgy meets
the public policy in Washington D.C.?

If you are an outstanding students in the areas of technology or public policy,
check out the Dell Thurmond Woodard Fellowship which is part of Eben
Tisdale Fellowship via http://www.tisdalefellowship.org . 202/986-0384.

* After each members has introduced themselves to Kaptur, she said, “I have
been in the Office as a U.S. Congresswoman for the past 23 years. This is the
first time that Asian Americans took an initiative to meet with me in my
regional office. I am very happy to have you here.” She also said, “Jewish
Americans in Northwest Ohio are the most active, and African Americans are
well-organized whereas Asian Americans are very quiet."

**NW-Ohio chapter's guests include community/business leaders, and Asian
Americans at the University of Toledo. In his speech, Mayor Bell publicly
acknowledged the impact of 80-20 NW Ohio Chapter on the city of Toledo and
Northwest Ohio. That remark was reported in Toledo Blade, a regional paper.
Posted by 80-20 Initiative at 12:12 PM

80-20 strived for and achieved DIVERSITY & QUALITY in its new Broad
of Directors! 45% of the its 2011 Board members are now non-Chinese-
Americans, although ONLY 15 % of its dues-paying members are
non-Chinese Ams.

An Unfortunate Situation
Exec. Director Daniel Feng resigned for personal reasons, beginning
1/1/2011. To ensure that his resignation doesn't make 80-20 extremely
short-handed, Daniel offered to volunteer 10 to 20 hours per week for
several months. He even stated that he'd volunteer more time if his
personal situation improves. Thank you, Daniel.

"All political systems are administered by human beings. Humans are
full of frailties and contradictions. A common frailty is that, faced with risks
to self interest, most humans will choose to accommodate the strong &
shortchange the weak. The AsAm community is the smallest minority,
the politically most immature and perhaps the most timid.

will very often opt to shortchange Asian Am individuals/orgs for their own
convenience. "

Want proof? Even native-born is NOT exempt from being stepped on!

"The most striking result is that native-born Asian
Americans -- who were born in the U.S. and speak English
perfectly -- their income is 8 percent lower than whites after
controlling for their college majors, their places of residence
and their level of education," ChangHwan Kim, assistant
professor of sociology and study leader, said.

See 80-20's full page public service ad in the Washington
Post, appended at the end of this email. Did any government official or
philanthropic foundation write 80-20 offering to be champions for Asian
Ams, as a result of that ad? None!

What is the solution?

God helps those who help themselves. We need to do as the Irish,
Polish, Italians and all other immigrants have done -- use the
political process. Help establish an AsAm org/coalition that has
the political knowledge, courage and integrity to induce our
federal/state governments to use their immense power to give
us equal opportunity. As individuals none of us has the
resources or the power.

80-20's full page public service ad in the Washington Post (For a clear view of this ad, click on http://www.80-20initiative.net/action/equalopp_washingtonpost_wpad.asp)

I am stepping back from a leadership to a supportive role by year's
end & want to try one more time to articulate the importance of an org.
like 80-20. I beg for 3 minutes of your time to read the following. S.B.


The Kennedy Library had an exhibit "History of immigrants in
America". It told how the Irish, Polish, Italians, and Jews all faced rampant
discrimination in America when they first came, and how they used
the political process to become equal citizens. It concluded with a
huge banner stating:

"The history of America is the history of the immigrant underclass
using the political process to climb out to be the equal class."

What does "using the political process" mean?

It means that a new immigrant group must organize itself to possess the
necessary voting power in order to get the attention of the politicians, who
can use the power of the government to make them equal citizens.

America's constitution guarantees equal opportunity
for all. Why is a political process necessary?

All political systems are administered by human beings. Humans are
full of frailties and contradictions. A common frailty is that, faced with risks
to self interest, most humans will choose to accommodate the strong &
shortchange the weak. The AsAm community is the smallest minority,
the politically most immature and perhaps the most timid.

will very often opt to shortchange Asian Am individuals/orgs for their own
convenience.

America always understood such human frailties. That's why Exec. Order
11246 exists which allows the use of statistics as one way to ensure decent treatment for the weak & powerless. However, even that law, E.O. 11246, was NOT applied for AsAms until this year, after a 10-year effort by 80-20.

That is why collective political clout under the leadership of an organization/
coalition with political knowledge, courage & integrity is so important.

(A) Summary of Shocking Facts (I):

Mr. Kelly points to the "harsh facts" faced by Asian Ams after their
graduation. 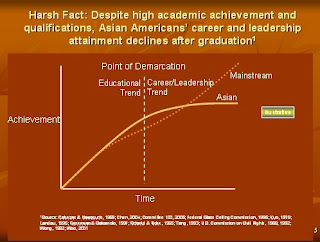 Do parents have the generational responsibility to remedy the "harsh facts"
caused by the society for their children?

(B) Summary of Shocking Facts (II)

Mr. Kelly goes on to point out that the mainstream society perceived
Asian Ams as "timid, afraid, followers not leader", and content to be
the "ignored group". See the table below. 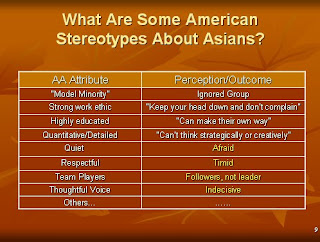 Have we been burying our heads in the sand? Most of us are so willing to
spend $50,000 a year to send our children to IVY League schools but not
$50 per year to help them break the glass ceiling after graduation? Why?
Too timid to get involved? Are we setting a good example for our offspring?

Before ending his presentation, Mr. Kelly asks rhetorically "What
can be done to address these issues?"

He suggested many ways* including
(1) "AAs must take personal & collective affirmative steps to highlight their
issues & develop leadership skills necessary to break through stereotypes," &
(2) "Supportive resources must be developed, recognized and seized."

Do YOU want to join 80-20 to take collective affirmative steps and provide
supportive resources? Do you know of an organization working harder &
more effectively to overcome these harsh facts than 80-20 Initiative?

To join, using a credit card, go
http://www.80-20initiative.net/. Using a check, please
send it to

Please be sure to denote your e-address on the back of the check.

Any one joining now will be a member for the remainder of this year
AND the whole of the next year. A NEW member's dues will be matched
by a $3,000 fund donated by Prof. Chenming Hu of U. of CA., Berkeley.

If we all sacrifice a little, then we can get the job done! JOIN!

The following are quotes from Senior V.P. of Southern CA
Edison, Jim Kelly, a Caucasian. He told it as it is. 80-20
thanks him. If you missed "Shocking Facts (I)," catch it at
http://80-20initiative.blogspot.com/.
- - - - - -
No individual or org. likes to be viewed as "timid" & "afraid" .
However, that is how the mainstream society views some of
our attributes.

Slide 9 of Mr. Kelly's presentation compares Asian Am. attribute
against how each attribute is perceived by the mainstream folks. 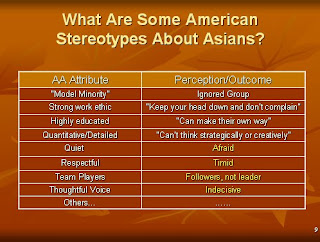 Personally, I don't believe that Asian Ams have lower leadership
aspirations. A true story will illustrate this point. A friend of mine has a
fierce appetite for leadership positions in Chinese Am. orgs. If one exists,
he wants it. However, this same person went out of his way to tell me,
"S.B. I don't want to be a manager in the Dupont Company." Frankly,
I thought it was a case of "sour grape". It was out of "timidity" to
compete in the mainstream and being "afraid" of a possible rejection --
losing face!

We all know some Asian Ams who are fiercely competitive against
fellow AsAms & who are afraid to compete in the mainstream.

Do we blame them? NO!

When women, blacks, and Hispanics didn't think they had equal
opportunity to compete, they exhibited similar self-limitations, but not
today.

The enforcement of Executive Order 11246 by the federal Labor Dept. in
eliminating the glass ceiling for women, blacks and Hispanics woke them
up. They realized that they do have a fair chance to compete. AFTER that
they full-heartedly prepare themselves to have the right attributes to
achieve their dreams.

What does it take to ensure that the Labor Dept. will honor its
commitment to us?

Collective action! Join 80-20 to collectively urge Pres. Obama, Labor
Secretary Solis*, & OFCCP Director Patricia Shiu to vigilantly enforce
the law for ALL Americans. Will they listen? Yes, they are already
listening. However, when 80-20's membership climbs from 2000 to
5000, you bet that our government will listen. It is that simple! It
is also that hard!!! Will you be one of the additional 3,000 to be
a part of our collective action?

Please be sure to denote your email address on the back of your check.
Anyone joining now will be a member for the remainder of this year
AND the whole of next year. NEW members' dues will be match by a $3,000
fund donated by Prof. Chenming Hu of U. of CA, Berkeley.

* Labor Secretary Elaine Chao, under Pres. Bush refused to make such a
commitment to Asian Ams.
Posted by 80-20 Initiative at 10:50 AM