Fear of Coronavirus caused a high school in NY to request Chinese students to stay home and not attend school.   80-20 sprang into action. To prevent such infringement of our rights from spreading to colleges, EF used your money to buy full-page ads at the campus papers of UC Berkeley on 2/13, Princeton on 2/21, UCLA on 2/24 and UC Riverside on 2/25.

The ad basically advises students to contact their college's Administration first, if they encounter discrimination against them on their campus.  If they need more help, then contact 80-20 EF.   To see the Princeton Ad which is the same as the others, click here.

Forward this message to your relatives in colleges.  Let them know that 80-20 has their backs.

Help from the Jewish Community

The following letter came from the Jewish Council for Public Affairs, JCPA.  It was co-signed by more than 70 other Jewish orgs.  Excerpts are shown below. Click here to see the entire letter.

"...  express our heartfelt solidarity with you ....  rising xenophobia
aimed at Chinese people in this country and abroad ... concern
can quickly turn into hysteria, which can lead to scapegoating.
We pledge to help ensure that Chinese people feel safe .. ....."
(emphasis added.)

80-20 appreciates this heartfelt sympathetic message.  I called JCPA's president and CEO, Mike Bernstein, to thank him.  He called me back to request spreading the news of "solidarity" through 80-20's email list.  To show powerful support for this solidarity, please sign this petition.  Do your share pls.

SELF-EMPOWERMENT - the most reliable HELP

80-20 SuperPAC continue to request that YOU

Don't vote for politicians who don't share our concerns.
Vote for Sen. Klobuchar who is the only one who does.
Be smart and be tough.


What if the exit polls on 3/3 find that most AsAms voted for Sen. Amy Klobuchar in CA & other states*, although she is hardly campaigning in CA & other big states?  Wouldn't that pass a fantastically powerful message to politicians that they NEED to share our concerns so that we can help them win elections?

FORWARD 80-20's e-newsletters between now and 3/3, which is the Super Tuesday to ALL your AsAms friends!   Then and only then will this message saturate our community to enable our self-empowerment.  IT IS SO EASY TO DO, WHILE  ITS RESULT WILL BE SO POWERFUL.   COUNTING ON YOU!

We'll Win One Way or Another

Henceforth, ALL ASIAN AMERICANS should
donate and vote for Sen. Klobuchar
only, in all subsequent primaries, until
other replies have come in.

Here Is the New Strategy.  What if?

What if the exit polls on 3/3 find that most AsAms voted for Sen. Amy Klobuchar in CA & other states*, although she is hardly campaigning in CA & other big states?  Wouldn't that pass a fantastically powerful message to politicians that they NEED to share our concerns so that we can help them win elections?  Fellow AsAms:  We'll always find a way to WIN even under the direst situation.   All we require is self-confidence.

To Win Equality, We Need a Clear Mind & a Strong Will

(1) Don't give away free your money and vote to a politician who doesn't share our rightful concerns.

(2) Don't let one's silly vanity control us - the ability to claim that you've donated & voted for the eventual winner. You are highly educated. Voting is not gambling. Voting in a democracy is to tell the political establishment what YOU want.

Do your share to forward this email to other AsAms please!

* Achieving that fantastically powerful feat may create a great situation for usAms during the general election when even Pres. Trump may court us.
Posted by 80-20 Initiative at 8:00 AM

Sen. Klobuchar Did Great for Us

Amy is not a sure winner of the Democratic nomination yet, but if nominated she will likely beat Pres. Trump. Why? She has a track record of winning in 42 counties which went for Trump 2 years ago. A Washington Post opinion piece states: "This Amy Klobuchar could beat Trump". She may also soon be the only woman candidate in remaining primaries.

In addition, she has been endorsed by 7 editoral Boards, including the NY Times and Las Vegas Sun where the next primary will be held.  It is more than any other 2020 presidential candidates.

DO REMEMBER that she gave us a written and signed promise that will practically begin to solve all our big problems, we MUST help ourselves and Amy along.  As a result, the Board of 80-20 SuperPAC resolved

Henceforth ALL ASIAN AMERICANS will
donate and vote for Sen. Klobuchar only,
until other replies have come in and if and
when 80-20 endorses another candidate
Please pass the word.  Helping Amy is EQUIVALENT to helping ourselves. Click here to DONATE $80.20* to her campaign. Show all politicians that if they help us, we know how to help back.  Show gratitude and at the same time empower yourself!

Imagine!  What if Sen. Amy Klobuchar actually becomes our next president?  Won't most of our big problems go away owing to her extremely strong promises to us? Yes, the chance is less than 50-50, but the potential gain is HUGE.

On big political issues, 80-20 is almost always right.  They include the dire warnings 80-20 sent you since 3 years ago that Pres. Trump's "big power politics" will place AsAms, particularly Chinese Americans, into more and more difficult positions.   They also include the wonderful opportunity I am pointing out to you now - in hime ourselves by helping Amy.   Please do your share.  80-20 can lead you to the door, you must do your share to kick it in.

Time is running out.  I am 82.  Are you sure that there will be another foolhardy but good in politics person like me to serve you?


We congratulate Zhang Financial.  Charles Zhang, its owner, used to serve on 80-20's Board.  He has been ranked #1 Financial Advisor in Michigan by Forbes.  Charles manages 80-20's $2.6 million investment pro-bono.  It has grown to $3.55 million today.

For a Chinese version of this e-newsletter,
click on https://goo.gl/6GsJWe

Sen. Klobuchar replied to 80-20's questionnaire with all yeses, and signed it.
If indeed the next president of the US has the same agreement in writing
and signs his/her name behind the promises, do you agree that most of our
problems will begin to go away?  To see her signed reply & appreciate the
significant of Sen. Klobuchar reply, click here.  YOU be the judge.

Could Sen. Klobuchar Become Our Next President?
YES after last Friday's debate!  NY Times rated her performance an 8.2/10, which was the highest score among the 7 candidates. A reporter at ABC said, it "was a breakthrough night for Amy Klobuchar." Boston Globe reported, "Amy Klobuchar had the best performance by far."Washington Post reported, "Sen. Amy Klobuchar had her strongest debate." Today, her stock may be as high as Biden's, and she is a lot younger.

How Can we Get More Replies?

80-20 can lead you to the door.  YOU must help kick it in.  80-20
respectfully request your faithful execution of the following Board resolution:

Henceforth ALL ASIAN AMERICANS will
donate and vote for Sen. Klobuchar
only in all subsequent primaries, until
other replies have come in.
The above is the best strategy to induce other candidates to reply.  Please help
yourself by forwarding this email to all your friends and relatives.  80-20 is only
as strong as you are.   You decide your own destiny.

For a Chinese version of 80-20's e-newsletters, click
on https://goo.gl/6GsJWe
Great News.  Sen. Klobuchar replied to 80-20's questionnaire with all yeses, and signed it.

You be the judge.  Read the 6 questions in 80-20's questionnaire.  Sen Klobuchar's all yeses reply means that she will, upon being elected the President of the USA, achieve the following feats for us.  They include issuing 3 executive orders to (1) eliminate the glass ceiling in workplaces above AsAms (2) promote more AsAms in the federal government to Senior Executive Service, and (3) enforce equal opportunity in admissions to elite colleges for our children, if the Supreme Court will so adjudicate.

In addition, she will (4) create a special office at the White House to receive complaints from AsAms regarding being racially profiled. (5) seek 80-20's input regarding the appointment of cabinet and sub-cabinet members whose offices have direct and strong impact on the glass ceiling, equal admission, and racial profiling issues., and (6) meet up AsAm leaders, organized by 80-20, to review the fulfillment of her promises, after 3 yrs in the White House.

Dear Fellow Asian Americans: If indeed the next president of the US, whoever the person may be, agrees in writing and signs his/her name behind the promises, do you agree that most of our problems will begin to go away?  YOU be the judge. 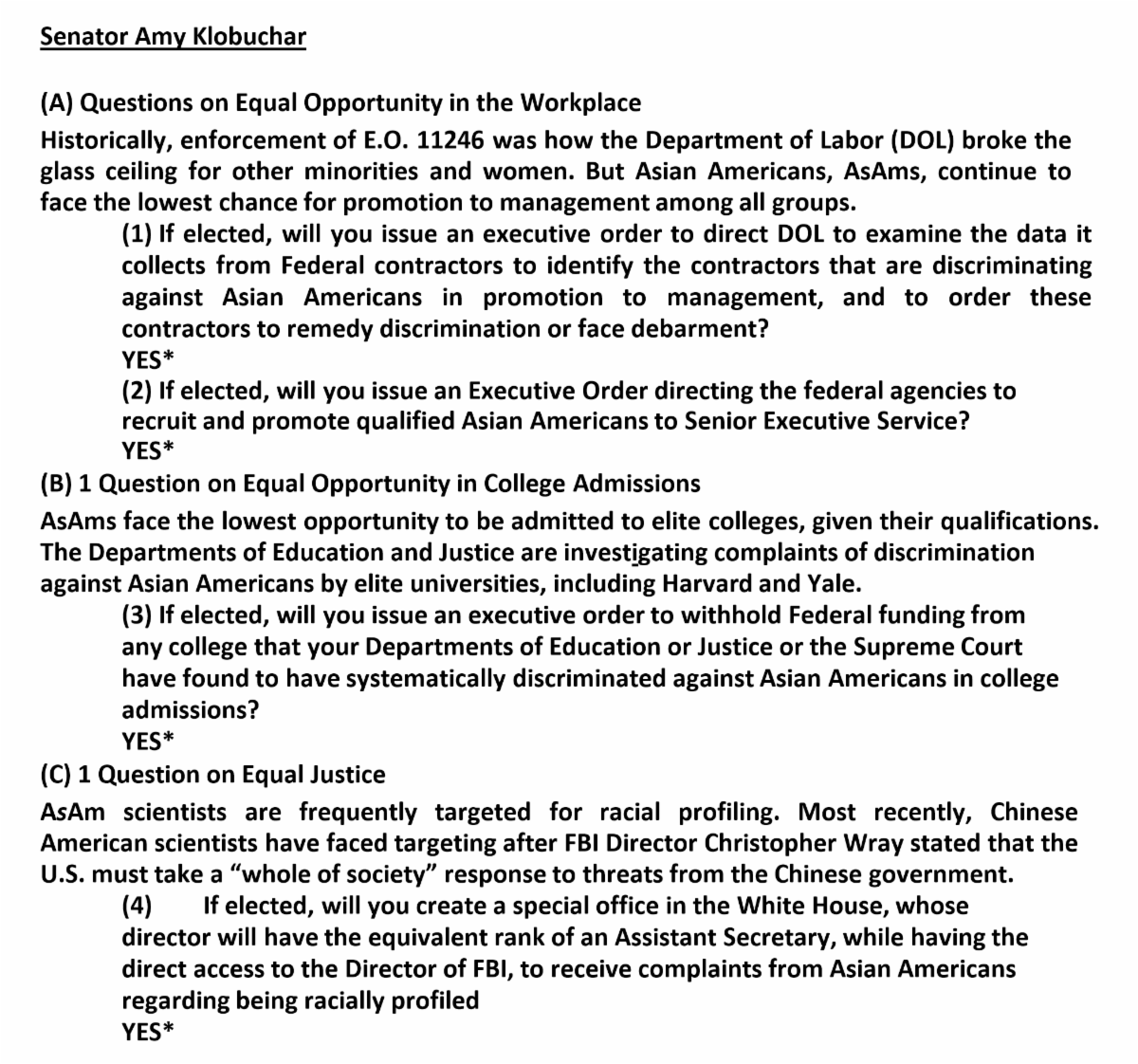 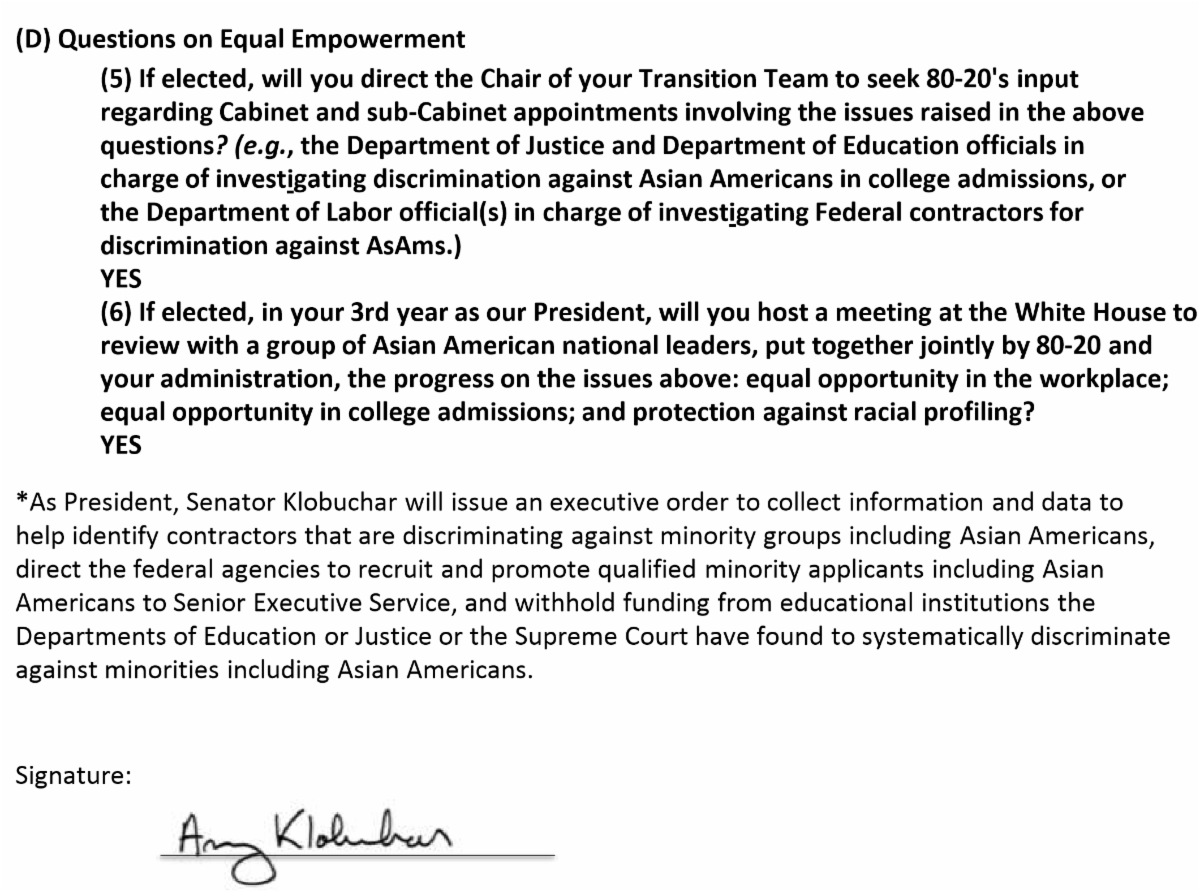 
We have NOT endorsed Sen. Klobuchar yet, because we are waiting for replies from more candidates to come in.  For now, however, support Sen. Klobuchar but no other candidates.  That's the only way to get them to reply to 80-20's questionnaire.  80-20 can open the door for you.  You must help to kick it in.

Examples are the Jewish AIPAC, the NAACP, the NRA, and perhaps the AsAm 80-20 Initiative.

Below we contrast AsAm elected officials versus AsAm political NGOs in 3 areas.  (A) vulnerability (B) having the resources to serve the AsAm Community, and (C) effectiveness.  Get ready to be shocked.

(1)  All elected officials are vulnerable, when it comes to re-election.  That's why they don't dare to do the right things which may be politically costly.
(2)  AsAm elected officials are  particularly vulnerable, because they raise money from AsAms nation-wide, and therefore have to provide service AsAms in order to please the donors.  But that could greatly endanger their re-election.

AsAm NGOs do NOT face re-election. They can serve the best interests of AsAm community with 100% devotion, within legal limits. They can even plan to defeat elected officials who don't share AsAm's rightful concerns - a feat that AIPAC has achieved many times, based on Jewish interests which in turn made AIPAC very powerful.

(B) Contrasting Having the Resources to Serve the AsAm Community:

AsAm elected officials have a substantial annual budget and more staff. However, they can't allocate any of those resource for AsAms nationally, unless they want to impeachment or defeat in the next election.

An AsAm NGO doesn't have the same resources, but its small resources are 100% devoted to serve you. 80-20 has squirreled away about $4 million. In time, with the help of compound interest, that small war chest shall explode to become $40 million or even $400 million. Just like the Jewish AIPAC, 80-20 shall one day have MORE resources than the elected officials, to protect your rights and serve your best interest. Indeed, 80-20's war chest could jump to $40 million tomorrow, if a politically astute AsAm billionaire reads this article.

In Dec. 2018, the Congressional Asian Pacific American Caucus couldn't even stop a law which aimed to punish Chinese Americans unconstitutionally from being included in the House version of the "Defense Authorization Act of 2019".  It took 80-20 EF, an NGO, to eliminate that House version from being included in the final Senate House compromise version.  Click on 1 and 2 to get the facts.  The above says it all.

What have our elected AsAm Congresspersons done for you in the college admissions (1 & 2), glass ceiling in workplaces (1 & 2), Hoover Institute's outrageous Report (1 & 2) and the profiling of Chinese Am. issues (1 & 2)? To recall what 80-20 Education Foundation did in the same issues, click on the respective (1 & 2). NOTE: we are not that satisfied with 80-20's effectiveness either, but in time 80-20 will do more and more as its resources increase.

None of the above is meant to disparage our elected AsAm officials.  All of the above is just to illustrate the DIFFERENCES between elective offices (I was an elected official myself) and NGOs.  Then and only then will we be able to protect our rights cost-effectively.