AsAm adults face the lowest glass ceiling in workplaces.  AsAm college-aged youngsters face the highest barrier to entering elite universities.   We are not equal citizens, not because we are lacking in personal effort and/or ability but because of institutional discrimination!  Behold these irrefutable statistics: 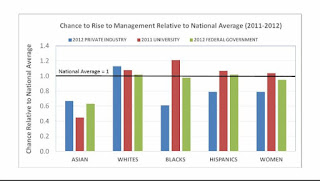 Presidential Election is Our Golden Opportunity

The Presidential election is our best chance of getting our grievances addressed.  One effective way is to get the candidates to answer our questionnaire.  See the results of getting candidate Obama to answer with "6 yeses" in 2008:

(2) lifted the glass ceiling on AsAm employees, especially federal employees somewhat but NOT enough. See what it used to be in 2003.  Compare this to the top chart. 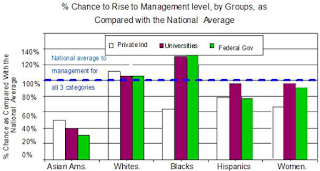 (A) The first three focus on the continued lifting of glass ceilings in private industries, universities and the federal government.

(1) If elected, will you issue a directive to the Department of Labor asking it to focus on enforcing Executive Order 11246 on behalf of Asian Americans including the usage of debarment for persistent violators?  In the past similar efforts have already been made on behalf of women and other minorities with remarkable success (see top chart).

(2) If elected, will you issue an Executive Order asking the federal agencies to promote qualified Asian Americans to Senior Executive Service?

(3) If elected, will you make it a top priority of your Administration to nominate qualified Asian Americans to serve as Article III life-tenured federal judges, whenever such vacancies are available?  These include the Federal District Courts, Courts of Appeal, and the Supreme Court.

(B)  The next 2 ask our next president to speak out against "race preference" in college admissions.  Or, if the Supreme Court decides against such admissions, then direct the Dept. of Education to enforce it.

(4) If elected, will you be willing to make a public statement in your first year in office that it is difficult for you to conceive that on the average Asian Am students admitted to first-rate colleges is holistically so much worse than the white, Hispanic and black students admitted that the Asian Americans student will need to score 140 point higher than whites, 270 points higher than Hispanics and 450 points higher than blacks in a 1600 point SAT scoring system to have equal chance to be admitted?

(C) The last one asks the next president to order DOJ to conduct an independent investigation.

(7) If elected, will you direct your Attorney General to conduct an independent investigation of the wrongly prosecuted cases of Drs. Sherry Chen, and Xiaoxing Xi, and to diligently continue this investigation if it has already been initiated?
YOU must help.  80-20 can't do it alone.

Candidates MUST do well in Iowa and New Hampshire or face demise. Hence, email your friends and relatives in those 2 states to speak to candidates and/or their campaign staff to urge they respond to 80-20's questionnaire.  Tell them that 80-20 will endorse those candidates in primary elections who give satisfactory answers.

Click here to see 80-20's cover letter and questionnaire that have been "priority mailed" to every presidential campaign.

President and a volunteer for the past 17 years
80-20 PAC, Inc.
http://www.80-20initiative.com/index.php and
www.80-20educationalfoundation.org

Are you a Harvard Graduate? Please Help.

Reason?  To nominate 5 candidates to run for 5 seats on Harvard's Board of Overseers. Their platform will be "Free Harvard, Fair Harvard." 80-20 joins others to take the battle for race-neutral admissions right up to Harvard's doorsteps.

Take one look at the following diagram, based on federally-reported statistics, and you will know that Ivy League schools have been limiting AsAms admits.  The population of Asians age 18-21 has doubled, while the population attending Harvard has dropped by about 50%.  In comparison, at meritocratic Caltech, its Asian enrollment has followed the population increase in AsAm youth. 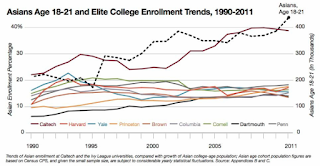 "A nation that selects its elites by corrupt means will produce corrupt elites.  These abuse must stop," said Ron Unz, one of the 5 candidates to be nominated.

The candidates advocate "far greater transparency in the admissions process, which is totally opaque and therefore subject to massive hidden favoritism and abuse."
Why "Free Harvard"?

Take one look at the diagram below and you'll know that the time has come for Harvard to exempt tuition.  At Harvard, the revenue generated is negligible compared to the investment income of the endowment. 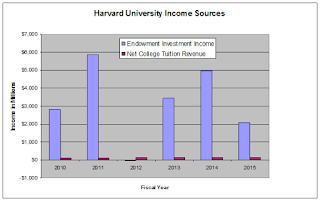 What YOU & Harvard Graduates Can Do

If you are a Harvard alum (of the college or any of the graduate schools) or you can guarantee 100% to get such signatures, please contact ASAP the 80-20 representative weijingzhu@gmail.com with your name and postal address; you will then receive a FedEx packet of 5 nomination forms which all need to be signed and returned by prepaid FedEx.

At the heart of this endeavor are several long time advocates who "have written or testified extensively against race-based admissions":
80-20 strongly supports Ron Unz's campaign to secure 201 signatures from Harvard alumni to assure that these 5 magnificent candidates will get on Harvard's next ballot for Board of Overseers. Forward. Help please.

Have you signed our national petition?  It's already supported by 6 Nobel Laureates and numerous leaders of science, technology and academia?
Posted by 80-20 Initiative at 2:06 PM

Help Sherry Chen to Help Ourselves

If YOU become a VICTIM of government prosecution purely due to your national origin, would you HOPE your community will come to your aid?

So here is the situation.   Sherry Chen was a VICTIM of DOJ's cyberspace dragnet. Her case was suddenly dropped just before trial.  Her life is in shambles.  She has a big debt on her legal fees and she may still lose her job.  What would you do?

If our hearts are made of stone, we'll say "Tough luck to her."  But 80-20 Educational Foundation (EF), National Association of Chinese Americans (NACA) and New Asian Leaders (NAL) think that most individuals in our community have hearts of gold.  We should help her to help ourselves.

The three organizations, with 80-20 EF playing the lead role this time, are co-hosting a dinner for two purposes.
(1) To raise a net amount of $18,000 for Sherry Chen's legal fee debt, and
(2) To honor Peter Zeidenberg, who successfully defended both Sherry Chen and Dr. Xiaoxing Xi.

What can you do to help?

Wherever you live click here to reserve your tickets. Or, please email Stephen Lin, spl.law@hotmail.com, to tell him how you'll help.  Steve Lin, a lawyer, is my Special Assistant. He'll be delighted to fulfill your generous wish.  Or make your check payable 80-20 EF, and mail to Katy Woo, 5 Farm House Rd., Newark, DE 119711.  Thank you.

President and a volunteer for the past 17 years
80-20 Initiative, Inc.
http://www.80-20initiative.com/index.php and
www.80-20educationalfoundation.org

PS:  Have you supported this national petition, already signed by 6 Noble Laureates?  If not, chick here.
It asks DOJ to conduct an independent investigation.
View a GREAT 3-part video about AsAms:
http://youtu.be/h781_ECSJYM
Like us on Facebook, follow us on Twitter
80-20 Mission Statement

God Helps Those Who Help Themselves

Unbelievable Positive Response
from Us and the Mainstream Community
A national petition, mounted by an independent group called "Concerned Scientists, Engineers and Professors", came online today.  The title of the petition is "We Want An Independent Investigation".

The initial group of signers include
O 5 Nobel Laureates
o numerous winners of President's National Medal of Science and/or Medal of Technology & Innovation.
o leaders of the science community and academia
e.g. 2 former presidents of AAAS plus many members of the National Academy of Sciences and a former President of Calif. Institute of Technology.

Click on  https://www.change.org/p/stop-prosecuting-the-innocent to see the names of those initial signers.  I just signed.  Join us and sign.  That website has many extemporaneous, other requests.  Just sign your name, leave your comments if you wish, ignore the rest and leave the site.

God Helps Those Who Help Themselves

After you've signed, please help begin a regenerative cycle of signers.  Click here to find a short letter which I beg you to copy and paste and send to ALL in your email address book.

80-20 and others have done our best to protect ALL of your rights.  It is up to you to do your share and help start a regenerative cycle of signers so that the Department of Justice will hear us.

80-20 is very grateful to groups in NY, Michigan, Delaware and D.C. which have either already sent letters signed by hundreds or are in the process of finalizing their letters.

President and a volunteer for the past 17 years
80-20 Initiative, Inc.
http://www.80-20initiative.com/index.php and
www.80-20educationalfoundation.org