Take a look at the table below.  All data came from the NY Times. 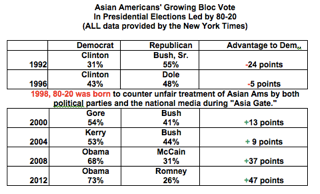 How come NOT a single Republican presidential candidate was endorsed?
Because NOT a single one answered 80-20's questionnaire.  Only FOOLS and those who are politically unaware would endorse a candidate without their written promise* to help AsAms.

80-20 is tough as nails.  Politicians who don't care for our rightful concerns: please review the ups and downs of the AsAm bloc votes and be ready to face the consequences.  Help 80-20 spread this message to the presidential campaigns.

[B] The power of a bloc vote

See "Exit poll 2012: How the vote has shifted" published by The Washington Post.

Wow, Asians Ams with only 1/6 population of the union households were already delivering almost half as powerful a bloc vote to Obama.   Listen!  Do you want political clout to win equal rights?   Support 80-20 EC's decision on how to vote in 2016.

[C] The Making of a Bloc Vote Explained.

Let's say that you are attending a meeting of 2,000 persons. It's noisy. Everything is a bit confusing.  Then a motion, whose substance you are only somewhat aware of, but have not really formed a firm opinion about, is put up for a vote. 20 persons speak eloquently in favor of the motion.  5 persons oppose the motion but only do a so-so job.  Guess what?  There will be an 80% chance that the 2,000 will vote to approve the motion.  Note that 20 speakers represent only 1/100 of the voting individuals.  But, still, these 20 persons cause the 2,000 to pass the motion, voting 80 to 20.

80-20 plays the role of those 20 speakers with its huge email list and its political ads.  80-20 is extremely clear-headed about politics.  More importantly, it has a record of effective and selfless service to the AsAm community, which renders credibility to 80-20's e-newsletters and its political ads.

President and a volunteer for the past 18 years
80-20 Initiative, Inc.
http://www.80-20initiative.com/index.php

* How useful are the promises?  You be the judge.  Since 80-20 has gotten into the action, there have been: a) the large number of AsAm cabinet and sub-cabinet officials, b) the lifting of the glass ceiling in federal government jobs resulting in many more AsAms in SES (Senior Exec. Service) and grade G15 levels, and c) the tripling of life-tenured federal judges in the last 8 years.  In addition, the number of Appeals Court judges rose from 0 to 4, and 2 of them recently received national media attention as possible future Supreme Court Justices, and d) rules changes in DOJ to stop low-level investigative personnel from profiling Chinese Ams as possible spies.  To verify the above, click here and go to the bottom of the page, item 8: "President Obama's Record After His Election."
View a GREAT video about AsAms:  https://youtu.be/2lUnFI0PW5o
http://youtu.be/h781_ECSJYM
Like us on Facebook, follow us on Twitter
80-20 Mission Statement

Session A:
Duration: 1.5 to 2.5 hours
Purpose:  Getting things organized

S.B. will be the temporary Chair.  Soon, a Chair for the entire EC will be elected by the Delegates.  S.B. will also explain the phone protocol since this is an electronic conference call.

2. Self-introductions.  (1.5 hours)  [What will be the value of this 1.5 hours?  If most people think it is not effective, I can eliminate this part and save 1.5 hours in a long day.  Personally, I think it has great value in inducing the candidates to identify with the EC.  Otherwise, many may go through the entire meeting without speaking a word.]
1.5 minutes for each Delegate and Alternate.  Anyone going substantially over 1.5 minutes will have his/her phone shut off by the Chair and his assistants.

Take notes, if you like.  Know your fellow Delegates, please.  After the endorsement, we'll be working together to deliver a bloc vote to the endorsed presidential candidate.

S. B. appoints a temporary chair since he or she will be a candidate for the Chair position.   A motion to nominate must a) obtain consent from the nominee & b) be seconded.
EC must be conducted democratically, giving all Delegates a fair chance to speak, and, at the same time, move the meeting forward without chaos.  Having a good Chair who really knows how to use Robert's Rules of Order to achieve "democracy without chaos" is the key to the success of this EC.
.
4.  Electing two members, one D and one R, to a Secret Ballots Confirmation Committee (SBCC).  (0.4 hour)

The EC Chair and the two members of SBCC will receive emails from all Delegates when the formal endorsement ballots will be cast.   This is the only way to approximate a "secret ballot" in an electronic EC.
5. Session A adjourns.  A precise time to reconvene Session B must be set. The recess shall be about one hour.

Session B:
Duration: 2 to 3 hours
Purpose:  (a) Statements from the Presidential campaigns
(b) a preliminary expression of the Delegates' choice
(c) a Q&A period to clarify each other's views

1. Statement to EC by the presidential candidate or their surrogates.
(0.5 hour)   [This is the most flexible part of our agenda.  Whenever a presidential candidate is ready, we'll interrupt our program to let him/her speak.  There is no need for the surrogates to address us since it will have very little value.  No one can really speak for the candidate except him/herself, unless a surrogate happens to (be) a V.P candidate.]

Each will speak for 5 to 10 minutes.  A very short Q&A is permitted after each speech.  80-20 thinks all bargaining will have been done by this point.  We'll encourage Delegates to just thank the speakers or ask gentle and general-natured questions.  If we have a formal Q&A session, the presidential candidates will probably refuse to participate. If the so-called "surrogates" address us, don't ask questions. To tell you the truth, the surrogates can't speak for the presidential candidates.

After each speaker has finished, he/she will be thanked and invited to leave the EC.

The first presidential candidate to commit to address the EC will be given the choice of speaking order.

2.  Preliminary discussion.  Who would be the best presidential candidate?
(1.5 hours)

The floor is open for any Delegate to speak what his/her current choice is and why.  The maximum allowed time is 2 minutes.   All speakers are encouraged to start with "My current choice is ....”  and end with “…but I'm willing to change my mind upon hearing others' views."  Another alternative is to state, " I am leaning toward X, because ... "   That way your eventual vote will be kept a secret.

Note that 80-20 focuses on winning equal rights for AsAms only.  To say that a candidate is better or worse for nations A or B or C in Asia is NOT appropriate. Bylaws article 3.6 prohibits 80-20 from getting involved in U.S. foreign policies.
Those delegates not having spoken on this topic will be given the priority to speak.   Otherwise, who will speak next will be left to the discretion of the Chair.  The Chair will try to end this sub-session after 1.5 hours.

Many Delegates have by now expressed their preliminary choices and why.   This second round permits Delegates to ask each other questions. Please be polite. Bear in mind that we are all working towards the same goal.  The type of questions we might want to ask will be: "I heard someone say that X is good to us because..., could you clarify that please."  Or, " I heard someone say that Y is good to us because....  I don't agree because I think....".

The Chair should allow only one speaker on each side of the debate on a particular point.  The Chair should then insist on moving on to a different topic and not allow a prolonged debate.

5.  Session B adjourns.  Session C will convene in about one hour.

Session C:
Duration: 2 to 3.5 hours.
Purpose:  (a) To endorse a presidential candidate and
(b) To agree upon a draft press release

1.  The Last round of discussions  (0.5 to 1.5 hour)
Each delegate may speak for two minutes.  Delegates who have not spoken much are given priority.  Otherwise, who will speak next will be left to the discretion of the Chair.  The Chair will try to end this sub-session after 60 minutes.

2.  A 0.25-hour recess for each Delegate to cast a formal "secret' ballot on whom to endorse

Each Delegate is to send an email to the Chair and the 2 members of the SBCC.  A precise reconvening time shall be set.

3.  Informing Delegates who is the endorsed candidate  (0.25 hour)

The Chair announces the result, to be affirmed by the two SBCC members.    If affirmed, someone will move to make the decision unanimous to be followed by a voice vote.

The session shall be recessed again for an hour for the Chair to draft a press release to be approved by the EC.   The draft shall be sent to each Delegate via email.  A precise reconvening time shall be set.

4.  Reviewing a draft press release and getting comments from the Delegates
(0.5 to 1 hour)

Let's have a great Endorsement Convention and come out united to deliver the most powerful bloc vote in AsAm history.

President and a volunteer for the past 18 years
80-20 Initiative, Inc.
http://www.80-20initiative.com/index.php

80-20' PAC's Bylaws specify that secret ballots be used for the endorsement vote, which is easy for a physical meeting.  But in an electronic meeting what I am proposing here is only an approximation and is unsatisfactory.  Pete Mauk told me that there is a GoToMeeting site and that
"It has the ability to poll the audience (voting) within the application -- So we can put the Chairperson election in there, and later the Clinton vs. Trump question."  Since his voting is to be cast through a commercial site and NOT via 80-20's website, I think everyone will be satisfied.  What do you think?  Please express your view.