Happy Holidays, friends. Thanks for your great support throughout the years.

Ever heard of "flash mob chorus?" Enjoy them!


PS: Donating to SELF on a monthly basis is now available. I want to, in particular, thank the following individuals who are already using it:

YOU REACHED THE $1 MILLION MARK

Have you done your share? Why is this email entitled "YOU reached the $1 million mark"? Think! You'll get it.

Do you want the same helpless feeling when you first heard about the Jimmy Kimmel "Kill all Chinese" episode? Want our children to continue NOT identifying themselves as Asian Ams when applying for college admissions? If you don't, then step up. Sacrifice and donate. Be the 501st family.

Your children & grandchildren will thank you. To donate, click here.

What is another $500 or $5,000 or $50,000 in your bequeathing to your children or grandchildren? Give them equality as US citizens. Money can't buy that for them. When you and 80-20 work together, your money will talk a lot louder politically and elsewhere.


PS: Please (1) place sbwEF@80-20.us into your email address book to receive some of our future emails to you, and (2) FORWARD this to your friends.

Tempering of Steel OR the Making of 80-20

1) Getting Abercrombie to withdraw its 4 T-shirts from all its stores, which insulted AsAm sensibilities –  within 3 hours.

3) Getting ABC to apologize in writing, signed by high-level executives, for airing the "kill all Chinese" video -- 2.5 days.

THEY RESULTED FROM THE WORK OF OUR VOLUNTEERS & STAFF WHOSE FACES ARE MARRED WITH DIRT, SWEAT & TEARS:

See how 80-20 painstakingly built a significant AsAm bloc vote, one election at a time: 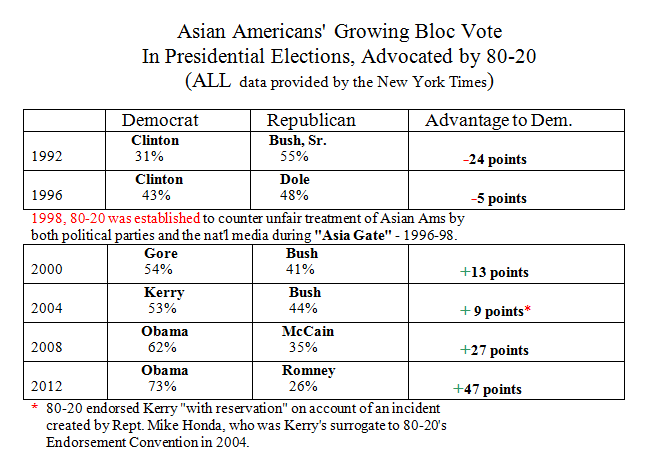 When a small minority in the US can deliver a lopsided bloc vote, it begins to win politicians' attention, since such a bloc vote can change the outcome of important elections. That attention translates into political clout.

The work never stops. We've started the 2nd stage of construction to make YOU politically stronger.

(2) Money talks. We must make our money talk for us.

Just a bloc vote is NOT enough for a small minority populated mostly by new immigrants. However, the combination of having a big bloc vote and sufficient money will give us a higher level of political effectiveness.

Hence, we set aside two years to do that job. You might have noticed that we are sending two, instead of one e-newsletter per week. So our volunteers are working even harder than before.

Will the combination be enough? NO, not yet.

(3) Building a bloc vote that will SWING:

We may have 5.5% of our nation's population, but we only have 3% of the voters, while many of us don't even bother to vote. So (1) and (2) is still not enough. We need to learn from the Jewish community again – a bloc vote that can SWING to either D or R, compelling our politicians NOT to take us for granted. Much educational work will be required to convince our folks of this pragmatic need.

We don't have to do it often. Just letting politicians know that we have the will and ability to SWING is often enough.

CONCLUSIONS: 80-20 works tirelessly to make YOU politically stronger. In addition, when immigrants from Asia win equal status with immigrants from the rest of the world, America becomes "a more perfect Union."

Want to help yourself and donate to SELF? Click here PLEASE.

When that mark is reached, we will have raised $1 million for the 5 year period. What a blessing that will be to our entire community in our effort to make our MONEY TALK FOR US.

Will YOU be the person to bring us that blessing? To donate, click here.

S. B. Woo, a volunteer for the last 16 years
President, 80-20 National Asian Am Educational Foundation

'Tis the season of giving

"For it is in giving that we receive."
― St. Francis of Assisi

The above is PARTICULARLY true when you donate to 80-20’s Self Empowerment Long-term Fund, SELF ! To donate, click here.

‘Tis the season of giving. Friends, to entice you to give I just added $500/yr for 5 years to the $2,500/yr for 5 years donated earlier. As you may know, I also donate $5,000/yr to 80-20 PAC. In addition, I have been a full-time volunteer for 80-20 Initiative for the last 11 years (actually 16 years as an almost full-time volunteer) to help protect Asian American rights! Kindly please consider doing your share?

‘Tis the season of self empowerment! Remember the ABC/Jimmy Kimmel episode? Many of YOU wanted 80-20 to do more? Is it realistic, since 80-20 has only a budget of $100k/yr? In comparison, the Jewish political organization, AIPAC, has a budget of $86 million per year. Yes, we understand why you want us to do more! We can, and we will, but have you and your friends done your share?

‘Tis the season of giving AND self empowerment all at the same time! You have nothing to lose, everything to gain. If, within 2 years, 80-20 EF can’t raise the minimal EMPOWERING amount of $1 million/yr for 5 years, your donation will be REFUNDED in full.

To donate, click here . Let us hear from you please. THANK YOU.

"For it is in giving that we receive."
― St. Francis of Assisi

PS:Please FORWARD to your friends.