1. Alice Huang has just completed her term as the President of American
Association for the Advancement of Science (AAAS), the world's largest
general science society. She is now the Chairwoman of AAAS.

2. Dominic Ng, Chairman and CEO of East West Bank, was elected
Chairman of The Committee of 100 (C-100) , a prestigious Chinese
American organization on May 13.

3. Ted Lieu was elected state senator of California on Feb. 15. He is
now one of the 2 Asian American senators in CA.

Other Life Members and members of 80-20 please send good news about
yourself to sbw@udel.edu. We'll be glad to celebrate with you.

Goodwin Liu's confirmation as a federal life-tenured judge was blocked.
We are yet very proud of Prof. Liu, as an outstanding law professor.
The only Dem. senator whom 80-20 supporters lobbied to vote for cloture,
Senator J. Webb, did vote with us.

Want to keep 80-20's precious political clout alive?
Then please do your share.

Want Goodwin Liu to be a judge in the Appeals court? He is often
mentioned as a possible candidate to become the first Asian
American Supreme Court Justice? Send an e-mail today

At least 4 more GOP senators and 1 Dem senator need to vote to break
the GOP block on Goodwin's nomination. The key Senators are shown
below. Send email now. The senate will vote for closure TOMORROW.

1) Sen. Jim Webb (D-VA), we helped elect him. He is about to retire)
http://webb.senate.gov/contact.cfm

GOP senator who supposedly have already committed to vote to
unblock are Senators Scott Brown (MA), Susan Colins (ME), and Lisa
Murkowski (Alaska).

Find a hook in the contents of you email. The hook must be truthful.
Otherwise, it'll ruin the reputation of the AsAm community. Examples of
hooks are:
1) I am a voter in your state, or I used to live in your state. Give address.
2) I have relatives and friends living in your state. Or I contributed to
your campaigns. Or I am a Republican/Dem. (Note:
Otherwise we ruin our community's reputation.)
3) We met. Specify when and where.
4) I usually vote R/D. But I am really unhappy about your Party
blocking judicial nominees for partisan politics.

Mention that you are an 80-20 supporter. Get the GOP senators accustomed
to knowing 80-20.

Goodwin Liu came from Georgia. That counts with GA senators. So 1f6 I hope a
lot of AsAms in Georgia will email. The more the two political parties
hear from us, the more they will pay attention to AsAms. Most AsAms
don't know that interconnection. 80-20 knows. Together we shall
overcome. 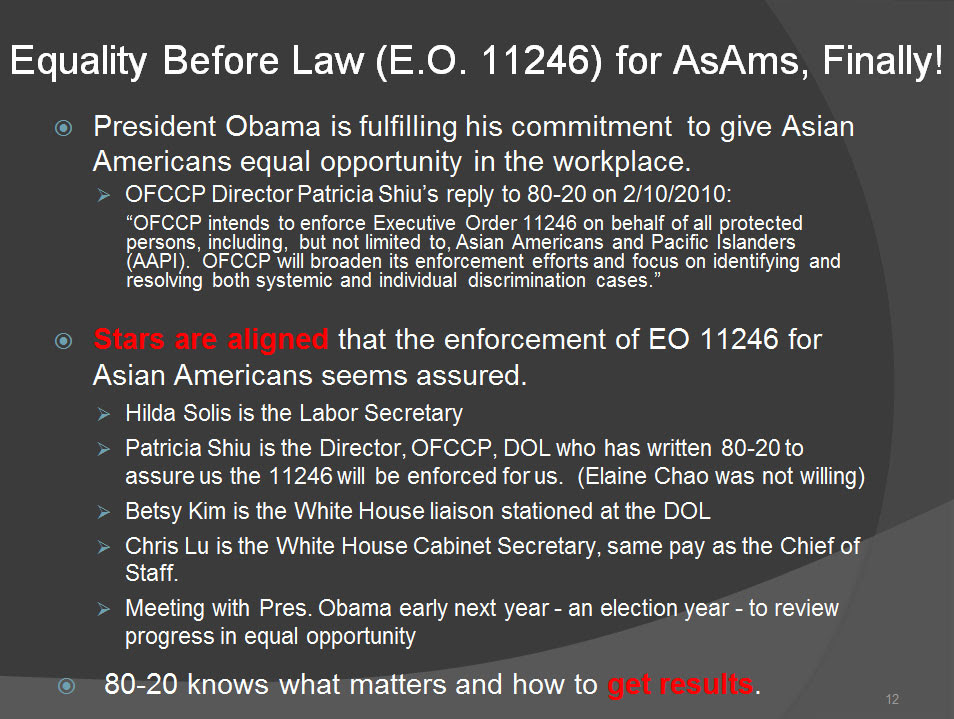 Take a look at the statistics shown in the chart below. Do you think that Asian Ams have been
discriminated in workplaces?

Ponder! Could the stars align themselves, as shown in the second bullet? Or have good people
with deep political knowledge done spade work?

When E.O. 11246 is enforced as the Dept of Labor has
promised, about 1.5 million Asian Americans will benefit
DIRECTLY, finally gaining equal opportunity. 1.5 million
Asian Am workers !! That is why 80-20 ranks this feat as its
TOP ACCOMPLISHMENT.

Try to recall if any government official or private organization,
be they AsAm or non-AsAm, has given you and your children
such service in the past?

If not, do you want to keep 80-20 alive by joining and doubling
its size? The enforcement of EO 11245 is NOT a reality until
our bars in the chart above are as TALL as everyone else'.
YOU BE THE JUDGE whether the AsAm community NEEDS
at least one effective national Political Action Committee.

Forward this email to your friends -- the last of 80-20's "Top 10
Accomplishments" series.

EXTRA! In yesterday's email, 80-20 predicted a 90% chance for Edward Chen to get the  Senate confirmation as a Federal District Judge. HE DID! 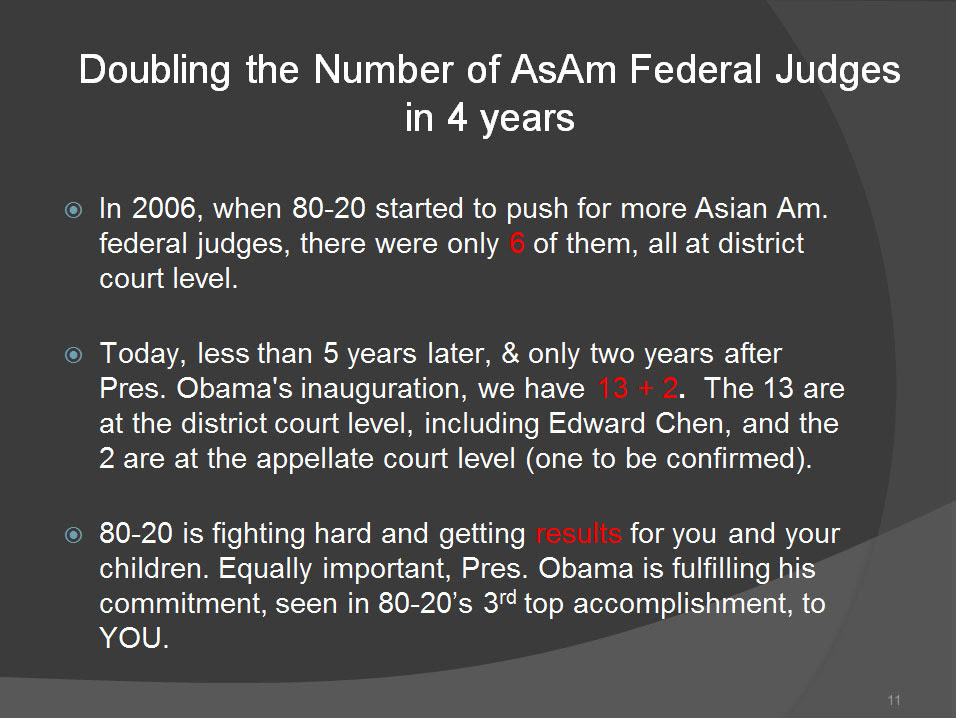 If 80-20 didn't exist how might your life be different?

Substantively, without 80-20, the % of AsAm federal judges may still only
be at 0.7% of the federal life-tenured judges, and all at the lowest rank of
District Judges. Yet, we have 4.5% of the nation's population, and a
disproportionately larger share of legal workers, many of whom are
graduates of top tier law schools.

Psychologically, and more significantly, having witnessed how 80-20
has successfully induced the US political leaders to address our concerns,
Asian Ams became aware that we are NOT destined to be 2nd class
citizens. We just need to organize our own GROUP political clout!

ADDITIONAL POLITICING by 80-20 to cause the
above DRASTIC imporvement.

Relying on Pres. Obama's willingness to help is not enough. We must
strive on our own. Recall that "God helps those who help themselves."

Here is what 80-20 did in addition to getting Obama's commitment.

1) 80-20 wrote every senior Dem. Senator in the 50 states urging
them to recommend qualified AsAms as federal life-tenured judges.
Most AsAms may not know this political protocol. The President
simply picks one of the 3 suggested by Senior Senators of his own
party.

2) In addition, 80-20's Board members talked to every one of those
senators or their legal counsel or the Chair of their Judicial
Nomination Committee urging the same and mainstained some
contact.

3) Furthermore, 80-20 donated to all who responded positively to 80-
20's prompting, after the nominations have been confirmed by the
Senate.

You signed an 80-20 petition to President Obama urging him to
renominate Edward Chen and Goodwin Liu as federal judges? Pres. Obama
responded by renominating those 2 jurists 4 times in spite of repeated
blocks by the Senate Republicans. Thanks to 11 GOP senators who
recently changed their minds, Edward Chen's block has been
lifted! He'll faces a straight up and down vote in the full senate today!!

If you send a fax to your own senators ASAP, you'll likely help get Edward
Chen of N. CA to become a life-tenured Federal District Judge. Just
state in your own words the central message as shown below:

"Please vote to confirm Edward Chen as a District judge. Thank you.
Your name, title (optional) and postal address."

Edward Chen will soon face a straight up and down senate vote. If you'll
FAX your own senators, 80-20 will give Chen a 90% chance to acquire the
Senate confirmation.

To find the fax number of your state's senators, click on
http://www.congressmerge.com/onlinedb/ It'll take less than 30 seconds.

If you don't have a fax machine, please go to http://www.gotfreefax.com/ which
allows you to send a free fax. Thank you.

Look at what is presented below. Will the AsAm community EVER have
the same success in gaining EQUAL OPPORTUNIY, if 80-20 vanishes from
the earth on 3/22/2012? Look at the "all-yes replies" to 80-20
from other prominent political leaders like Vice President Biden, Sec.
of State Hillary Clinton and many others. To see them all, go
http://www.80-20initiative.net/news/preselect2008

Years later, when a child asks you,
"Grandpa, were you willing to part with the $35 or $50 to
save such a worthy organization?"

What will be your answer? 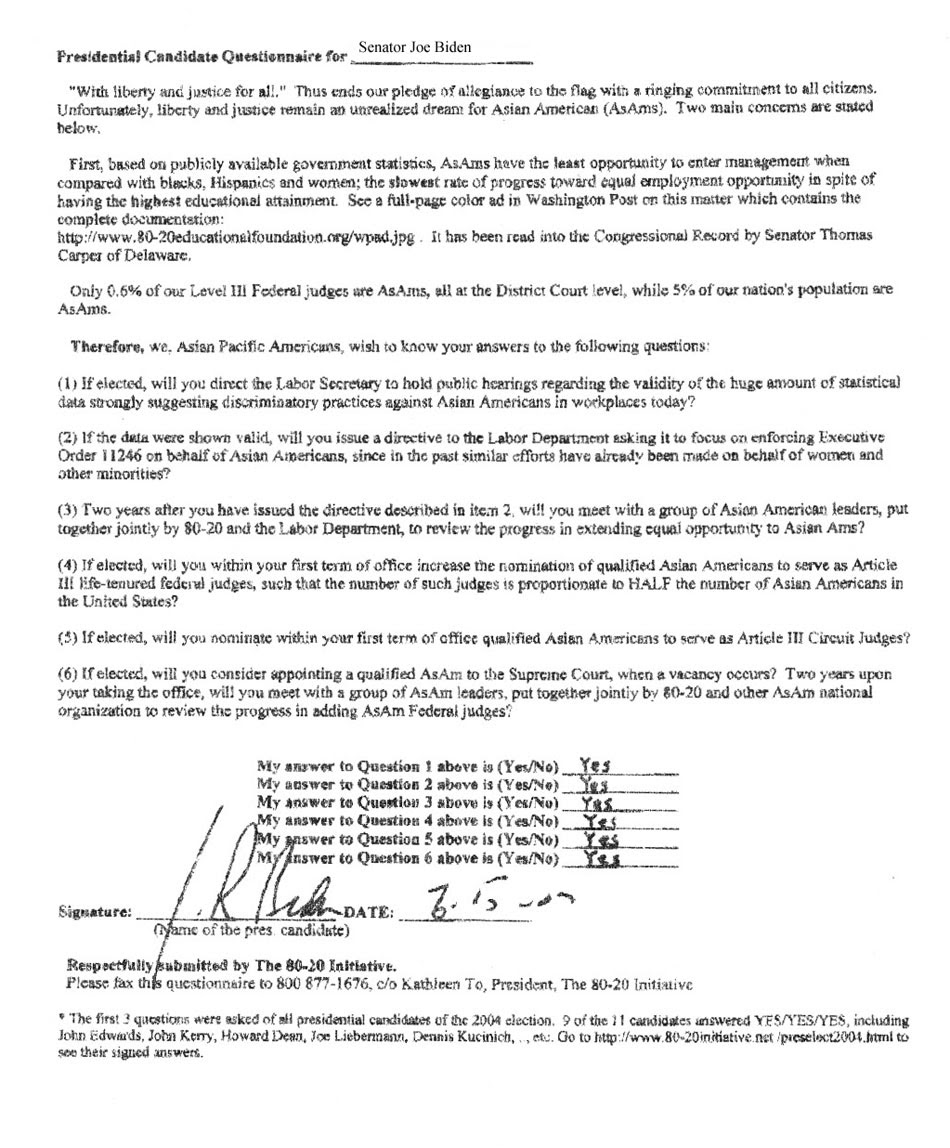 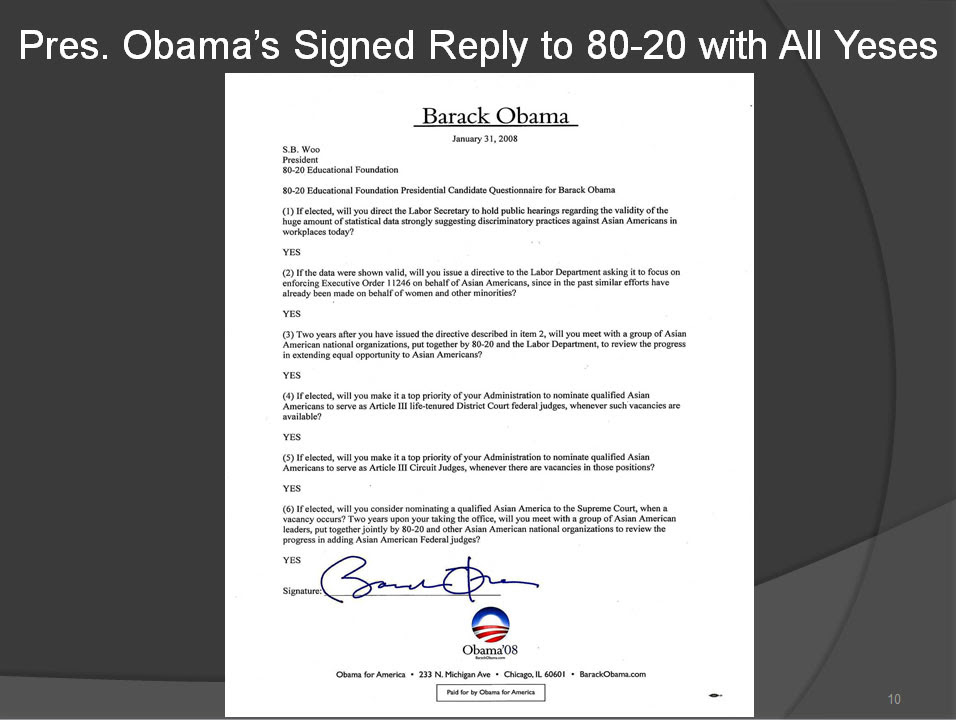 If 80-20 didn't exist how might your life be different?

The above landmark achievement, a signed promise by the President of
our great nation to help Asian Americans achieve equal opportunity, WOULD
NOT exist. Please read the above historic document. The commitments
are truly significant. They are being carried out.

These commitments mean that instead of waiting 75 years to achieve equality,
we may not even have to wait for 10. Even a 73-year-old like me may
live to see it.

Did 80-20 Get the Commitments Because It Is Pro-Democrat?

No! Quite to the contrary, 80-20 fought the leading Democratic candidates to
get these commitments. We fisrt fought Hillary Clinton. When she
signed on, we fought Barack Obama. We fights even spilled into the public.
To see how fierce the battles were, see the titles of 80-20's emails during that
period:

The above email titles can still be found at 80-20's website. Click on
http://80-20initiative.blogspot.com . However, the contents, valid only
PRIOR to Obama's commitment to our community, have been deleted.

Do you know any AsAm organization
which dares to wage such a struggle?
80-20 did. Why? Were leaders of 80-20
simply dumb or simply dedicated?

If your conclusion is that we are dedicated, are you willing to encourage us
by joining as members for your children's sake?

NO! It was probably candidate Obama's respect for America's core
value -- equal opportunity -- that made him decide to work with 80-20
to make his epic commiment. However, without any doubt, 16 million
AsAms made progress towards equal opportunity. In addition, America
became "a more perfect Union." Please FORWARD thi 53d s e-newsletter to
your friends.

To show our deep appreciation of Obama's noble commitments which might
and may still cost him politically, 80-20's volunteers worked our hearts
out for Obama in the battleground states in 2008.

*A Dem. Primary was waged in CA between Clinton & Obama in Jan., 2008.
80-20 had endorsed Clinton because she had already made a very strong
commitment to AsAms while Obama still had not.