Getting ready for the 2016 Presidential Race? 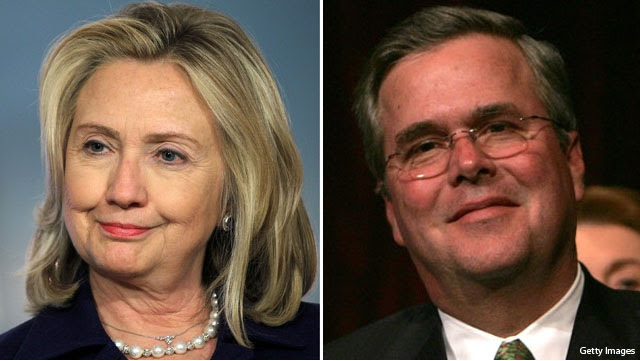 "Jeb Bush and Hillary Clinton - two central figures in modern politics with 2016 prospects - joined forces Monday to talk global education."
"In her keynote address, Clinton praised Bush's dedication to education reform since serving two terms as governor of Florida, where he overhauled the state's education system, introducing a school voucher program and banning using race as a factor in university admissions."
When there is a will, there is a way. Let me know by emailing sbw@udel.edu, if you are interested in working with 80-20 to jointly find a way to interject this topic into the next presidential campaign. Do you head an organization with 100 or more members?"
Even when you said that you are very interested, there is NO commitment from you to work with us, until more details are agreed upon. We just to see if it'll tickle the imagination of the Asian Am community. Love to hear from you, pro or con. Please use real name and e-mail address. :-)

(B) A recent LA Times article --a succinct description of the past, present, and future of SCA 5:
Its title is: Affirmative action non-action still causing waves in Sacramento, published 3 days ago.
The author is Melanie Mason who is the LA Times reporter stationed in Sacramento to cover the CA legislative activities. She should know the real story.

(C) Media Attention on AsAm's 2016 Presidential Race Inclination:
What Asian Ams. in CA have done in SCA 5 has SHAKEN the political world. As a result, 80-20 President, S.B. Woo, was interviewed by reporters from both ends of the political spectrum, regarding our community's possible voting inclination in the 2016 presidential election. A shift of 3 million
AsAm votes in 2016 will be an earthquake! With such media attention, opportunities abound! Are we good enough to seize it? The reporters were

(i) Katy Murphy who writes for Oakland Tribune - Mercury News - Contra Costa Times -- all liberal papers, and
(ii) Tim Cavanaugh who writes for The National Review, a bimonthly conservative magazine started by William Buckley.
Let's keep our eyes on the ball -- how to win equal opportunity for our children through the 2016 elections. Let's work together!
Have you REGISTERED to vote?